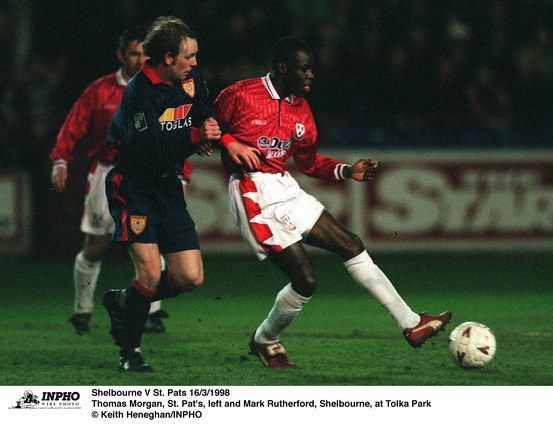 English footballer Mark Rutherford began his career in England with his hometown team of Birmingham City in 1988.

Rutherford made five appearances for The Blues in a three-year stint before moving to The Auld Reds in 1991.

Rutherford stayed with Shels for two years notching up an impressive 88 Appearances and 10 goals from midfield as he also helped the Reds to the 1991 League title, their first in 30 years.

Rutherford then joined Shrewsbury Town in 1993 where he made 14 appearances for Shrewsbury in a league winning campaign in the English 3rd tier, before returning to Tolka Park.

Mark then spent four years in Tolka lasting from 1994-98 where he made 106 appearances for the Reds in his four-year return, scoring five goals and winning two FAI Cups for in 96 and 97 with him being involved in one of the most iconic goals to the Shels faithful as he contributed to Stephen Geoghegan’s goal against Pats in the 96 cup final replay.

Rutherford then joined Newry in the Irish league where he spent two years before joining Shels’ Dublin rivals Bohemian FC.

He then moved sides while remaining north of the river Liffey By joining Shamrock Rovers for the 04-05 season making 62 appearances for Rovers before completing his Dublin journey and joining Pats in 2006.

As he neared the end of his high level football career he joined Longford for one season in 2007 before returning to a now much more unstable Shels in the First Divison before retiring at the end of 2008.

Rutherford is now heavily involved in Lucan United’s set up in their youth squads and plays for the senior team.