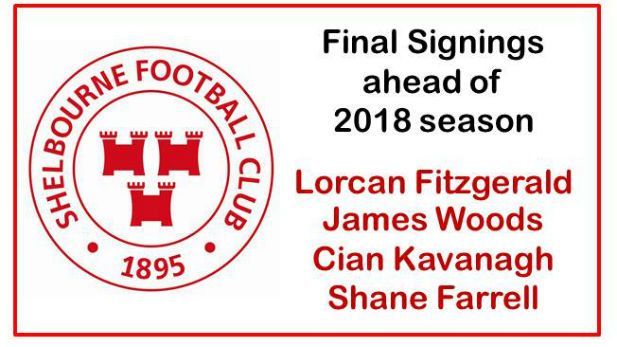 Lorcan Fitzgerald, James Woods, Cian Kavanagh and Shane Farrell have been announced as the final four signings to manager Owen Heary’s squad, ahead of the 2018 Season.

Lorcan Fitzgerald joins the Reds for the third time, having joined West Ham from Shels in 2006, again joining us from Sporting Fingal in March 2011 and was part of the team that won promotion, though he missed out on the Cup final against Sligo Rovers through injury. At the end of the 2012 season he joined St. Patrick&rsquo;s Athletic. Lorcan spent the past three seasons at Bohemians.

Cian Kavanagh returns to Tolka Park having been on loan to the Reds from Shamrock Rovers for the 2016 season, during which he made 21 League appearances. He had joined Rovers from St. Kevins. Cian joined ex-Shels manager Collie O&rsquo;Neill at UCD for the 2017 season.

Shane Farrell joins from Finglas United. He scored a last minute goal to win the Dalton U19 Cup Final for his club against Knockmitten last season &ndash; “Farrell took matters into his own hands and set off for goal with just seconds remaining. After beating two players he was felled in the box, he dusted himself off and scored the crucial cup winning peno ”