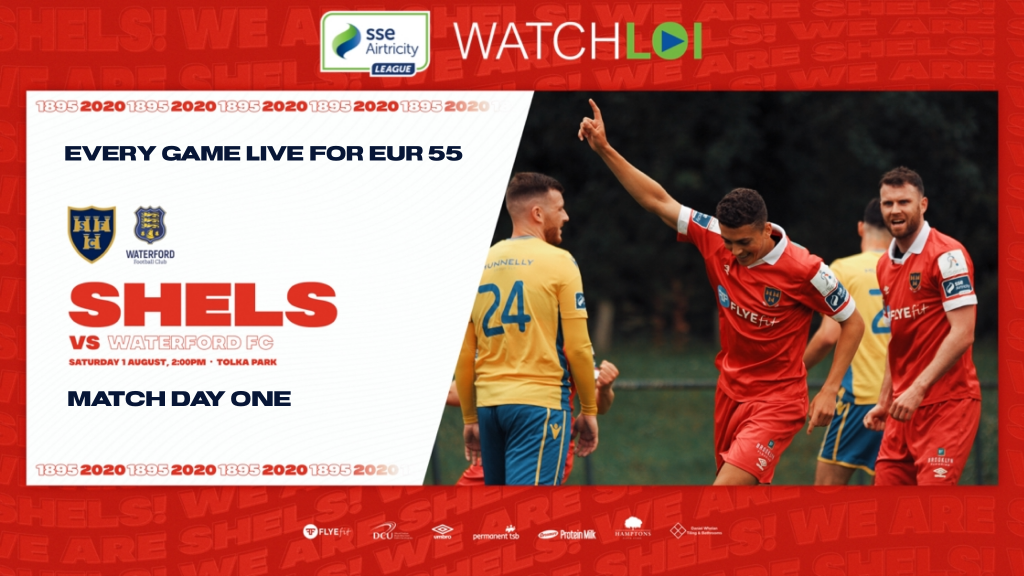 We’re delighted to introduce a brand new streaming service, WATCHLOI, where Shels fans will be able to watch every SSE Airtricity League Premier Division game in 2020.

WATCHLOI is the league’s first-ever streaming service which will deliver SSE Airtricity League Premier Division football to all supporters in Ireland and around the world.

As announced previously, Shels Season Ticket holders will have access to a free streaming pass with individual codes to be sent out prior to our first live game against Waterford FC on Saturday, August 1.

The Football Association of Ireland and RTE Sport, in collaboration with GAAGO, have partnered to deliver a world class streaming platform which will guarantee supporters can watch the #GreatestLeagueInTheWorld wherever they are on watchloi.ie.

Each Premier Division fixture, as well as selected Extra.ie FAI Cup matches, will be live streamed with RTE Sport’s cameras and commentary team set to create a fantastic production for supporters to enjoy.

Season passes are available now on the watchloi.ie platform at just €55 for supporters in Ireland and €69 for the rest of the world. It will be the perfect way for supporters to support their club with revenue created set to go to each club and with over 55+ matches set to be on the platform, it is also great value.

The SSE Airtricity League is set to restart on Friday, July 31 with Derry City v Sligo Rovers to be the first match streamed on the platform, kick-off at 5.45pm.

“Working with RTE Sport and GAAGO will guarantee that we will have a best-in-class product which SSE Airtricity League supporters will be able to enjoy around the world.

“Especially with COVID-19 restrictions, this is the ideal time to launch this service but with the revenue it will generate for the clubs, this is also a major moment for the league and a fantastic opportunity to promote and enhance the domestic game in Ireland.”

Declan McBennett, Group Head of Sport, RTÉ said: “In these uncertain times, when dedicated fans are unable to attend games in large numbers, we are delighted to bring the games directly to them via WatchLOI.

“This is a chance for the whole of the Irish footballing family to get behind the SSE Airtricity League and lend their support in every way to the clubs as the heartbeat of the association.”

Below are some questions that we believe fans will ask following the release of the platform;

·  How much is Shels and FAI making from this?

·  I only want to watch my club; can I just buy a club pass?

·  Will every league match be shown on the platform?

·  Will the matches that are shown live on EirSport be available to watch in Northern Ireland?

·  I am a season ticket holder for my club, do I have to pay?

·  How many cameras will be at each game?

·  Who are the commentators?

·  Will matches be available for catchup on the platform?