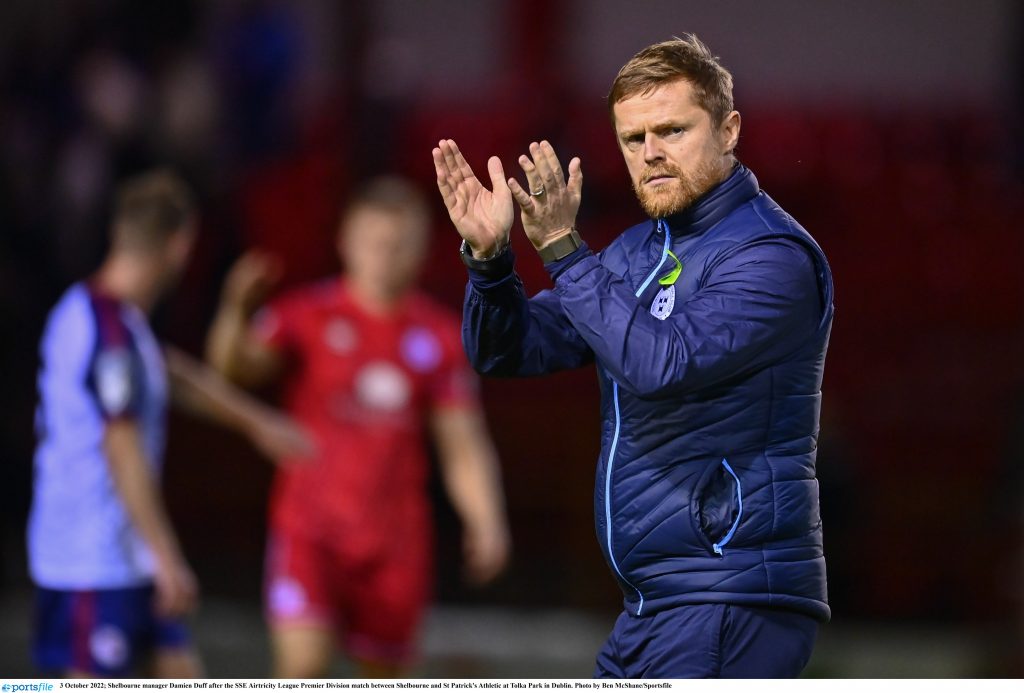 Shelbourne Head Coach Damien Duff is relishing back to back Dublin Derbies as the Reds make the short trip to Tallaght Stadium to face Shamrock Rovers on Sunday.

The game comes after the thrilling 4-4 draw with St Pats at Tolka Park last Monday, a game in which Matty Smith scored his first goal for the Reds, JJ Lunney also netted while Sean Boyd took his tally for the season to 9 goals with a brace.

Reflecting on the game, Duff told ShelbourneFC.ie: “It was crazy game, as a manager and a staff we can’t get carried away in the chaos, that’s what the game was. We need to be calm, keep the players focused and that’s what we’re trying to. Difficult in that situation, a crazy game. We look at it as two points dropped for sure. We gave away 4 awful goals.

“We dissected the goals with the players on Thursday morning, looked at the clips, we’ll take the learnings from it but we have to move on quickly. It’s gone. There’s positives for sure, from an attacking point of view the lads were top class.”

Duff has no new injury concerns and shared a positive update on Brian McManus and Jack Moylan, who’ve been out of action for a number of weeks, Duff said: “Brian McManus is back in the matchday squad, not sure if it’s too early to risk him or if he’ll get game time, but he’s back and fit and in great form.

“We won’t know until he’s on pitch if he’s ready though. Jack Moylan is back on the pitch too in training. We’ll monitor him closely, tomorrow will come too soon for Jack, but signs are encouraging now that he’s back on the grass.

The Hoops are top of the table and looking to move a step closer to the SSE Airtricity League title, the last meeting between the sides two weeks ago ended in a 0-0 draw but Duff feels that result will have little relevance for this game:

“The big learning from it is that they have 3 or 4 gears they can go up again, for all the quality they have, they’re managing a massive load, games are coming thick and fast and you have to factor in the travel for Europe, that’s tough and it definitely can affect recovery, that said we’re expecting a different animal tomorrow,” said Duff.

“We’re not going to get carried away with the point and a decent performance at Tolka Park two weeks ago, tomorrow I expect a reaction from Rovers, we know they can go up a few gears, they’re fighting for a title. It’s a huge game for them.”

In recent weeks JR Wilson has reestablished himself as a key player in the starting XI, having returned to form for the pivotal time of the season. Duff was quick to praise the Ringsend native:

“That’s the JR I want and demand, I spoke to JR many times this season. He’s still a young man, he’s got a young family, a new baby, he had big changes in his life. JR has tried too hard at times this season, tried to force it, maybe gripped the bat too tight, we’ve seen a a marked difference now in recent weeks. He looks relaxed, playing with a joy and a freedom and that’s when people are at their best, that’s probably why he’s flying.”

“We were first to do Derry, they were in great form, nobody probably expected us to win up there, the lads won’t lack belief though, no matter who we play. The big thing for me is the team has grown substantially over the last few months.

“Even if you compare where we were at the last time we played Rovers before the summer break, the strides we’ve made, the maturity of the younger players, we are a different animal now too. We’ve grown so much and we’ve made giant strides.”

As the Reds approach the business end of the season, with an FAI Cup semi-final to come and the remaining games in the SSE Airtricity League to be played, Duff reflected on his first year in the dugout as manager:

“I enjoy it, in a strange way. I love the focus it gives me, I genuinely love the dressing room, the staff we have. They’re good guys and I care about them. The biggest thing for me is I go to training every day, every game, with a smile on my face.

“I honestly enjoy going to work everyday. Not everyone can say that in life, I’m very fortunate. I think we’ve proved people wrong too, people outside mainly. I’m sure plenty of them were saying I’d walk, I wouldn’t stick it or down tools.

“I’ve loved the challenge. The big thing is working with people who you can trust, who give it everything. That’s what I’m lucky to be surrounded by. I’m happy with the path we’re on and in particular the growth of what is a very young team.”