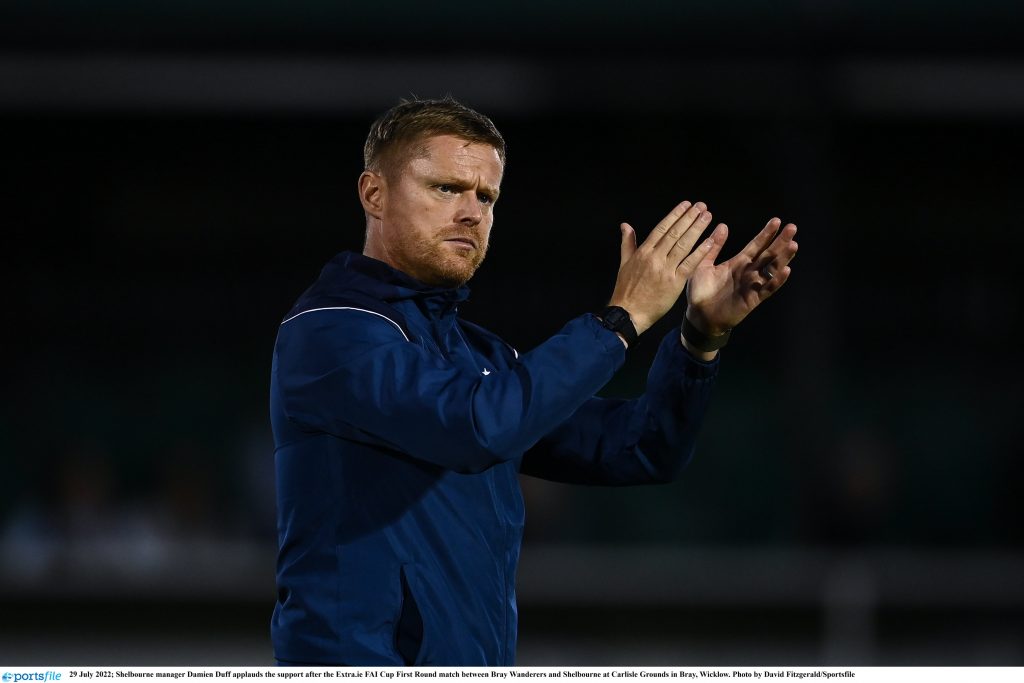 The Reds begin the night in 7th place, 3 points behind Bohs but with a game in hand. A solid performance saw Shels pick up a result on the road last week, leaving Oriel Park with a point after a scoreless draw.

Head coach Damien Duff was delighted to see Aaron O’Driscoll return to the field after a recent concussion. Delivering a team news update, Duff told Shelbournefc.ie: “Mark Coyle will be involved in the match day squad, he’s making progress but we have to be patient with Mark, we don’t want any more setbacks.

“Jad is making small gains each week. He’s not right yet, when he’s ready, it’ll be great to have him back. Lukey is struggling, he’s doing everything to play through it, but he’s carrying some injuries. Kam picked up a knock in training, we’re hopeful he’ll be involved, but he’s also struggling.

“On the flip side, JR Wilson is back from suspension, he’ll be important for us and the big man Sean Boyd is also available again, which is a boost for sure.”

Duff also delivered an update on Conor Kane, who underwent surgery for the injury suffered in the 0-0 draw with Dundalk: “Conor Kane will be on a long road to recovery, it will be beyond the end of the season before he can look at getting back.

“It’s a very difficult one for Conor, a horrific injury, a lot of people watching on live tv, that’s hard for Conor’s family and friends and that would’ve shook him.

“Conor is signed for next season. We’ll do right by him. He’s in the best hands. Doctors, surgeons wise, he’ll get the best quality of care at the club. We’ll look after him. He’s a huge loss in our dressing room, on and off the pitch. Personality, energy, enthusiasm, he leaves a big void. From a pure footballing point of view, he’s a big miss. It’s up to someone now to step up and to fill that void.”

The Reds face a Sligo side who have won their two most recent games, beating Drogheda United 2-0 and Dundalk 2-0, but the record books record a 3-0 loss now for their game with Dundalk, after running afoul of the FAI’s independent Disciplinary Committee.

Duff said: “We’ve watched their stuff, results breeds confidence. Sligo are in a good place. They’re playing well. They’ve a good young manager in John Russell. Sligo had a positive run in Europe, they’re a club, team, and squad in good shape and making strides. It’s a real test for us. We want to make Tolka Park a tough place to come, it’s a special place for us and for the supporters, we’re building a real bond and we want to put in a big performance, we know how important it is with this game and what’s to come, to turn up get a result and put in a performance.”

Shels have played Sligo three times this season, winning twice and losing once. Although the defeat at the Showgrounds was largely down to a number of contentious calls by the officials on the night.

Three goals for the Reds were chalked off in the second half off that defeat, with Aidan Keena scoring a penalty in injury time to give the home side the win.

Duff said: “We had some good results against Sligo, won two of the three games, should’ve won the most recent. In Sligo, we lost 3-1 and had two stonewall goals disallowed. Not surprising, we’ve been on the end of a few of those this season. It was a good performance and we deserved more than we got that night, but at home, the 2-1 win, that was a big victory for the team, it brought us on a lot. It was our first home win and it probably came at a time that took some pressure off the lads and allowed them to play with some more freedom. The lads stood up since and played brilliantly at times.”

With the Reds going into a pivotal time of the season, Duff knows the importance of momentum, and the Shels boss feels the Reds have been picking up steam: “We’ve grown so much this season, we’ve a very young team, they’ve made great strides, even from the break. We’ve had some disappointing results, but there’s games as well where we’ve walked away on the losing side, and we absolutely should’ve won. We’ve grown as a team, we’ve gotten better as a team. Momentum is gradually growing in those performances anyway. I think the fans can see that, I think they’ll appreciate that the lads have been top class at times and we want that to continue, starting with Sligo at home, it’s a massive game.”

Shelbourne v Sligo (Kick-off 7.45pm). Live coverage of the SSE Airtricity League Premier Division encounter at Tolka Park is on LOITV, for a price of €7 for the game. Commentary comes from Dave Armstrong and Reggie O’Malley.