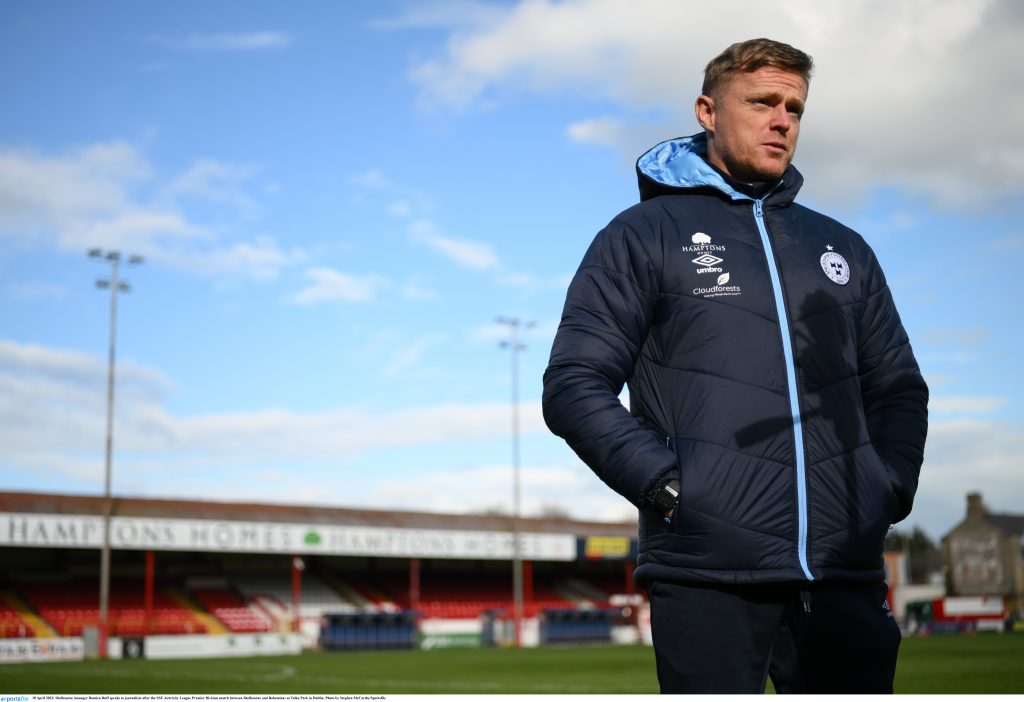 Shelbourne Head Coach Damien Duff is looking to bring down the curtain on our season at Tolka Park in winning fashion as Drogheda United visit for what is the last outing on home soil for the season.

The Reds sign off their final home game with the visit of the Louth club in what is the penultimate game of the SSE Airtricity league campaign for 2022.

Duff will be boosted by the return of Sean Boyd who is available again after serving a two match suspension.

The Reds boss told ShelbourneFC.ie: “It’s great to have Sean Boyd back from suspension. He’s a presence and an energy on the pitch and off it, around the training ground, other players and staff notice it, when fit and available he’s great. You know Sean is there, he brings energy and as a manager and coaches, we see it, he makes a positive impression. On the pitch, he rattles back lines and just causes trouble.

“Jack Moylan, Mark Coyle and Brian McManus all got some minutes in recent weeks, that’s a good step forward and now it’s really important we keep them fit, and monitor the guys week to week, it’s been a long season. Over the next week or so we’ll look to take the load in training down a bit. Most important is to keep everyone sharp and fit over the next few weeks.”

This will be the fourth and final meeting between the Reds and Drogs this year, Shels lost the most recent match 3-1, but beat Kevin Doherty’s side at Tolka, 1-0, and earlier in the season goals from Dan Hawkins and Mark Coyle saw the Reds leave Head in the Game Park with 3 points. Reflecting on the meetings between the teams, Duff said:

“Our games against Drogheda United this season have been very tight matches, they’ve had a good season, cemented in the division, and weren’t dragged into a scrap at the bottom. You’d have to say Kev Doherty has done a great job. Looking as well I think maybe they’ve a squad similar to ours in the sense that there’s some players in there with points to prove. We have that as well. That motivates guys and can bring something out in them in games.

“We lost our last game against them, but look that’s part and parcel, we’re going to lose matches, but the manner in how we lost up in Drogheda, I was not happy with, I think more so than me the players were disappointed with themselves. They shouldn’t need a team talk now tomorrow off me, it’ll be up to them to bottle that feeling, they’ll have to show what that loss meant and maybe channel it tomorrow night in their performance.”

As the Reds wrap up their final home game of 2022, Duff was keen to thank the fans for their unwavering support at Tolka Park this season, telling ShelbourneFC.ie: “I’m very proud first and foremost to lead the team out at Tolka, but listen it all comes down to results as well for me. I’m not happy if we don’t win.

“At times it’s been a difficult place for teams to come, Rovers, Sligo, Drogheda, Harps but hey at other times not so. We’ve taken a lot of points on the road which really stood to us as the year wore on. We want to build on what we’ve done this year. To do that we really need to make Tolka a fortress everytime. That’s where the foundation of a successful club is built on, home form, consistency in Tolka. The supporters have been wonderful this year, results, good or bad, they’ve got behind the team, bought into what we’re trying to do, and that means a lot to me and the players and staff.”

The academy has played a vital role this year, with a number of graduates coming in to make first team debuts and feature in the league and cup, among them Gavin Molloy, Jad Hakiki, Gavin Hodgins, Lewis Temple, and Stephan Negru have all played their part. Reflecting on the season as a whole as it reaches the final stages, Duff feels the imprint of the academy in the first team bodes well for the future:

“When we look back on the season, the impact of the younger players is definitely something we’re pleased with, tinged obviously with some disappointment around Jad’s season being cut short, he was in a really good place in the summer, starting week in, week out, but the injury, it’s been a chronic issue and we haven’t been able to get him right.

“That’s a big disappointment. The opportunities for academy players to make the step into the first team, that’s naturally and very organically happened where young boys have come in. We’re not giving them minutes for the sake of, those lads have deserved the chance, they’ve done well. I’m excited to see how it grows. Look at players moving up from U17s to U19s. We’ve won the National League at underage level, it really is an amazing achievement. Young boys out there looking for a player pathway to the top level, you can’t look passed Shels because as a club we’ve shown that it exists this season.”