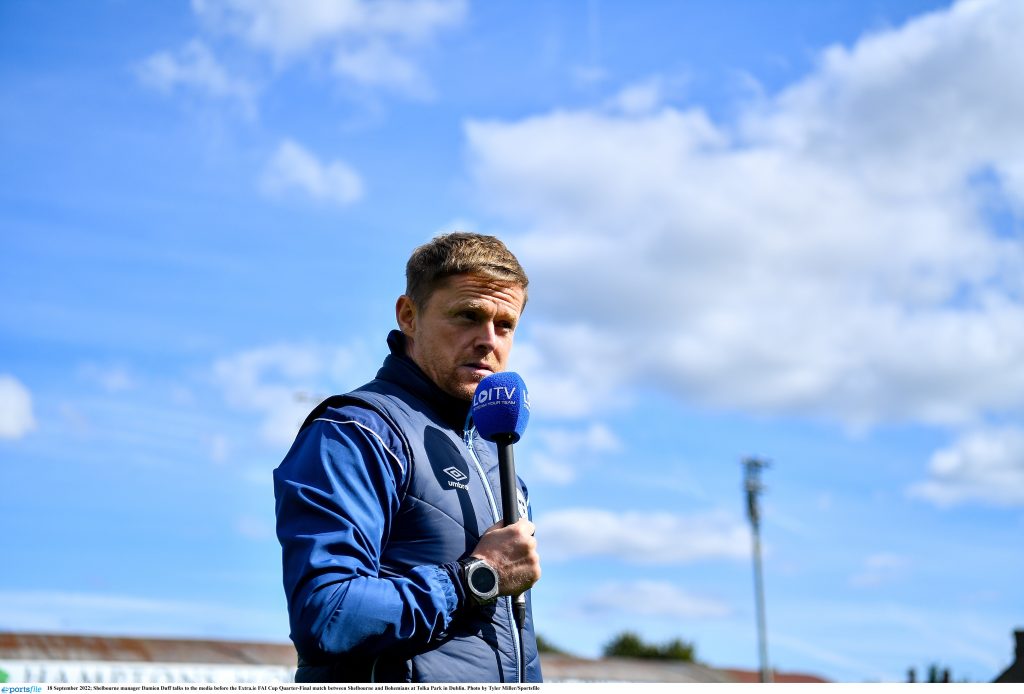 Shelbourne Head Coach Damien Duff is looking to make it back to back wins in the Dublin Derby as the Reds welcome Shamrock Rovers to Tolka Park on Thursday evening.

Duff was boosted by a return to fitness of Kam Ledwidge and Luke Byrne for the 3-0 win over Bohs in the FAI Cup quarter-final.

Duff will have to plan without Jack Moylan for this one, he told ShelbourneFC.ie: “It’s a short week with the game on Sunday then out again Thursday, so it’s a different training schedule, we had our pre match meeting and back on the grass today. We’re in good shape. Jack Moylan is out, he picked up an injury in the win over Bohs. Aside from that we’re doing well for bodies. Jad is still managing his injury, we need to rest him, and obviously the long term injured lads as well.”

The Reds are on a high after the win over their fiercest rivals, but Duff is confident his squad will quickly back down to earth after the 3-0 demolition over the Gypsies: “They trained really well today, you feel a focus off them, just pressing a reset button. Today was the first proper day on the pitch. We’ve told them a sign of a good team is following up one really good performance with another one. That’s what top teams do. We don’t want to be up and down, amazing one game then flat the next.”

Rovers remain top of the SSE Airtricity League Premier Division table, but with a tricky run of fixtures in the league and in Europe they have won just 1 of their last 5 game. Despite their recent results, Duff knows the Reds are gearing up to face the best team in the country. Duff told ShelbourneFC.ie: “They’ve had difficult games in Europe, but at the end of it all they are the best team in the country, winning the last two leagues, they have the best group of players, I don’t read into recent results too much, they’re a quality side.”

The Reds have played the Hoops twice this season, losing on both occasions. Despite being undone by a late goal in Tolka Park, on a night where a draw would’ve been well deserved for Shels, Duff is keen not to gift them goals this time around: “What have we learned? Don’t give them a goal after 1 minute, ridiculous the head start we’ve given them in both games. We need to make a proper game of it, give ourselves a chance. Conceding after 1 minute isn’t acceptable. They have the best technical players, up in Tallaght too. I didn’t think we could concede faster than we did at Tolka, but we managed it. Tomorrow we need to stay compact and organised, got to be willing to press them to win the ball back. The goals we gave away were very poor and with a team of their quality, you can’t give them that kind of head start.”

The Reds have been drawn to face Waterford FC in the FAI Cup Semi-Final, reacting to the draw Duff said: “It’s a difficult tie, Waterford are a dangerous team. They’re a close knit group, but they have real quality too and some talented players. Waterford, Treaty United, first division, premier division, it doesn’t matter in a cup semi-final. Won’t have a bearing, no matter what team we got, our approach would be the same. This level, you have to respect the teams you face, look at how they’ve got here. Big results. A team with their quality and ambition, nobody will look past this game or take Waterford for granted.”

Shelbourne v Shamrock Rovers. Watch all the action on LOI TV, every Premier Division fixture is available to watch for €7. Commentary from Conan Byrne and Ciaran Kilduff