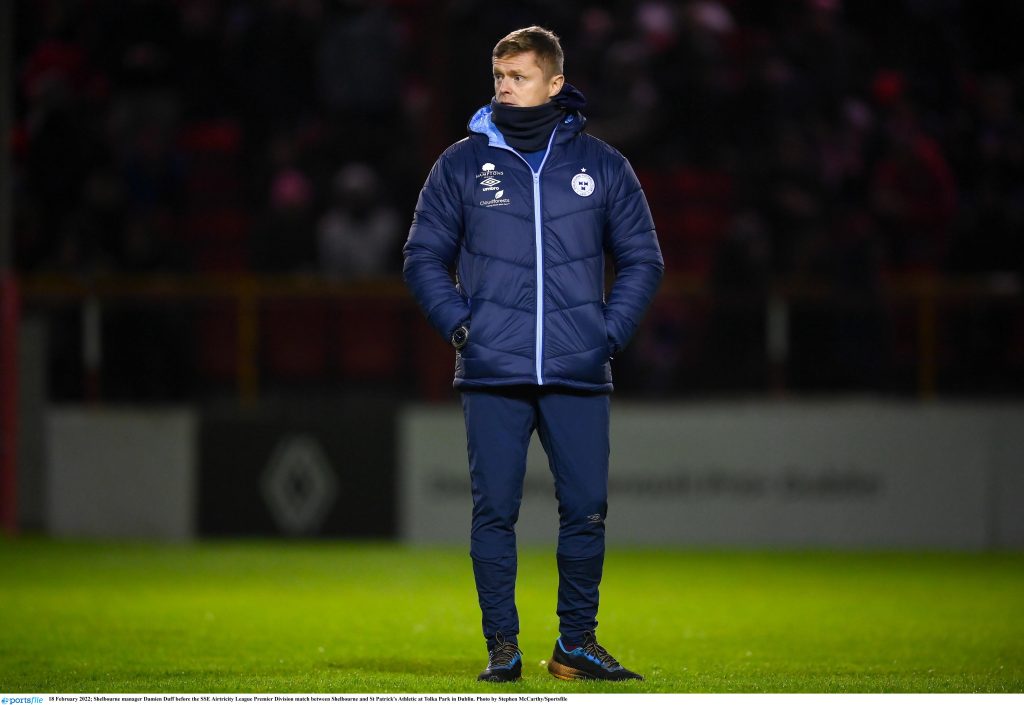 Mark Coyle once again got minutes as he continued on his return to full fitness having struggled with injuries in recent weeks, the midfielder came on as a 77th minute substitute in the 0-0 draw with Shamrock Rovers at Tolka Park last Thursday.

Jad Hakiki continues a gradual return to action as he steps up his rehab from a persistent issue that has limited his contribution for a number of weeks now.

The trip to Harps will come too soon for Jack Moylan and Brian McManus, but Duff told ShelbourneFC.ie that the pair will be given every chance to prove their fitness over the coming weeks: “We’re still waiting on Brian McManus and Jack Moylan, they’re making progress. A bit too early to make a call or put in a timeline, but they’ll do everything they can to recover.

“Brian has a hamstring issue, he had a scan during the week, he’s pain free and nothing too bad, but we won’t take chances, we’ll give him some time. There are big games coming thick and fast.

“We’re down to bare bones again, we have been a few times this season and we have to be clever over the next few weeks and manage loads. I know the lads out injured will do everything to make it back, huge league games, and an FAI Cup semi-final, that’s a big motivator.”

The Donegal side remain rooted to the bottom of the SSE Airtricity League Premier Division table, but just a point separates them from UCD in 9th. Despite their struggles, Duff is expecting a tough test against the Harps:

“The weather is turning up there, that’ll be a factor, the pitch too. I don’t think you can go there and expect to play the same game of football we did at home, there’ll be a tense atmosphere I’m sure, it’s all or nothing for Harps, they near on have to win, you know that by looking at the table. They’re a hard working side, they’re a lot more dangerous than maybe the recent results and position in the league would have you believe.”

Speaking of the previous meetings so far with Harps this season, Duff said: “We’ve grown as a team since our last performance against Harps.

“The game at Tolka, a 3-1 win. It was a brilliant football performance. We were in total control, and we were full value on that day. Up there though on Friday, it’s a totally different beast to be honest.

Harps go into the game off the back of a loss to Bohs 2-0 in their most recent game at home, Ollie Horgan’s side have just 1 win in their last 5 outings. Despite their struggles, Duff is braced for a tough test:

“In previous seasons, this is where you’d argue they come alive, Ollie’s been there before. He’s the best man possible for this, he knows the fight and he has shown they can turn things. We are not underestimating the task.

“Watched a lot of their stuff recently, it’s a very hard place to go to and play, and even harder to get out of there with a result.”

Duff has been pleased with what he’s seen from his side in recent weeks: “You’d be happy to see us put in a run of good performances, helps to create a momentum, going back to the game on TV against Dundalk, a really well earned point, solid performances against Sligo, didn’t get what we deserved from that game, but encouraging signs. Then we had Bohs, Rovers, we saw two really good shifts from the lads.”

Gavin Molloy has won plaudits from supporters for a number of solid performances, and Duff was keen to add to those who have praised the third generation Red:

“Gav Molloy has been magnificent, he’s still so young, I think people look at his size and physical strength and he seems a lot older on the pitch, he’s still only 20-years-old. He’s been immense. People might take that versatility for granted, but it’s brilliant to be able to do what he does, flip in and out of centre midfield and centre half, not many players can do that as well as Gav has been, and look comfortable at that level.”