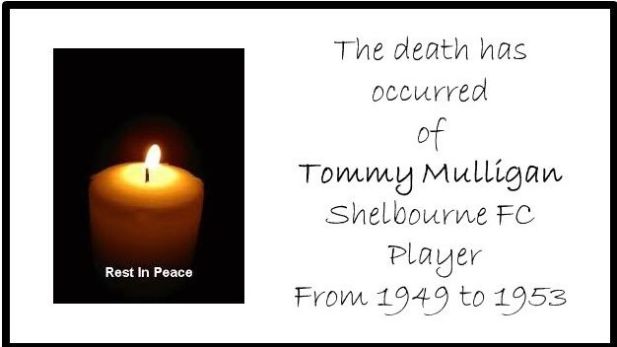 We have been informed of the death of a former player, Tommy Mulligan, a left-full / centre-half from 1949 to 1953.

During his time with the Shelbourne, he played in 40 league games and 6 FAI Cup games for the First Team. He was presented with a ‘Special Merit Award’ by the club before a winning league game against Shamrock Rovers at Tolka Park on February 12th 1999.

All at Tolka Park send our condolences to Tommy’s family, friends and former colleagues.

We have reproduced Tommy’s Death Notice and Funeral arrangements from RIP.ie

Mulligan Tom (Raheny) &ndash; August 24th, 2018 (peacefully) in the loving care of his family, at home. Cherished husband of the late Elsie and much loved father of Peter, Stephen, Ann and Sheila. Tom will be sadly missed by his loving family, sisters Myra and Marguerite, brother Paddy, son-in-law Annraoi, daughters-in-law Geraldine and Corina, grandchildren Darragh, Aisling, Lisa, Andrew, Leo, Cian and Alanna, great-grandsons Jordan and Mason, sisters-in-law, extended family, and his many friends.

Reposing at the Kirwan Funeral Home, Fairview Strand on Monday (August 27) from 6pm to 7pm with family in attendance. Removal to the Church of the Resurrection, Bayside on Tuesday (August 28) arriving at 9.50am for 10am Requiem Mass followed by burial at St. Fintan&rsquo;s Cemetery, Sutton. Family flowers only please, donations in lieu, if desired to the Society of St. Vincent de Paul.

“May he Rest in Peace”