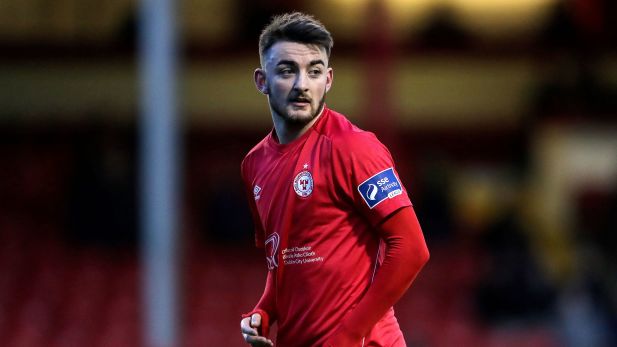 Having broken into the Shels starting lineup with a string of impressive performances, midfielder Daniel McKenna says he has loved playing at Tolka Park where “the crowds really drive us on.”

Attendances at Tolka Park are up 36% compared to this time last year, and the Reds have an impressive home record since their defeat to Cabinteely at the start of the season.

“The fans at the home games have been really good recently. We had a mixed start to the season, and we&rsquo;ve been giving them something to shout about there now. Some of the away games can be quieter but the support has been really good,” he says.

Shels lost 1-0 last week despite dominating the game away to Cabinteely with a penalty miss, woodwork being hit twice and numerous chances. McKenna, though, appreciated the support the players received after the match.

“If you weren&rsquo;t at the match you wouldn&rsquo;t have realized what happened in it, and the fans were there to cheer us off at the end which makes us feel that little bit better about it,” he says. “I suppose that&rsquo;s one of the positives along with the chances we created.”

McKenna has played with Wolverhampton Wanderers and Bray Wanderers in recent years and the Shels number 16 says he has enjoyed “the professional nature” of the Shels set up. “When I arrived I didn&rsquo;t go straight into the team, had to work for it, and that&rsquo;s because of the quality in the team and the standards that have been set from management.”

McKenna has formed a partnership with Oscar Brennan in central midfield, one where he has enjoyed “being given the licence to push on” and express himself creatively. “Oscar knows his role and he is really good at it. We are developing that understanding where I sit if he goes forward and he sits when I go up.” He describes the group as “a tight knit group of lads” and a dressing room all the players are “close on and off the pitch.”

When asked on his ambitions for the season, it&rsquo;s simple, he says: “to win the league.” The SSE Airtricity League First Division has been remarkably tight this year with the Reds sitting in third position behind Longford Town and Cabinteely who play each other this weekend.

“I knew it was going to be a tough division, but the lads have even said it has improved a lot this season. We were favorites going into it, and we&rsquo;re in third, so it just goes to show how competitive it is.” he says. “We know we didn&rsquo;t start off too well, but we have dusted ourselves off and given the fans something to cheer about. It&rsquo;s a two way thing I suppose, we need them and they us to deliver.”