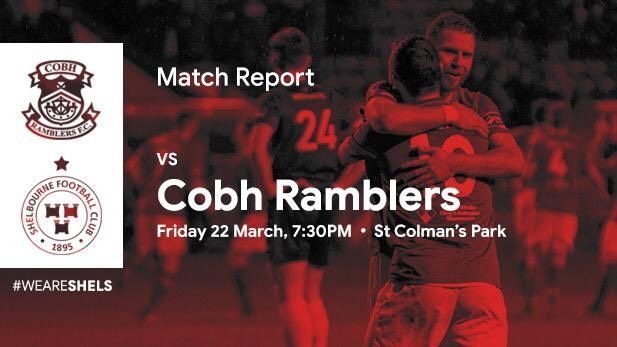 Cobh Ramblers put in a hugely impressive performance to secure a 2-1 victory over league leaders Shelbourne on Friday evening.

It was clear from the off that manager Stephen Henderson wanted his side to press the ball with high intensity. It proved to be quite successful in the early stages as Shels struggled to in possession. The first real chance of the game came in the 19th minute when after some great work by Stephen Kenny saw Ian Turner volley over from twelve yards. Dave Hurley saw his curling effort cleanly saved by Delaney soon after. Shels continued to find it difficult in the final third of the pitch and were reduced to an acrobatic attempt from Brennan while Kilduff almost found a way through before O&rsquo; Riordan cleared. Ramblers kept the same pressure up throughout the half but failed to create anything clear cut.

The second half began much in the same vein as the first with the home side pressing at every opportunity. It was that intensity that lead to the opening goal in the 60th minute when Kabia capitalised on an error from Delaney. The pass back to the keeper appeared simple enough but the ball bobbled at the wrong moment forcing Delaney to take a touch. Kabia got there quickly, got a touch on the ball and had a simple tap into the delight of the home crowd.

Energised by the goal, Ramblers went looking for a second and found it in the 71st minute through Denzil Fernandes. After some good build-up play, Kabia set up the winger who burst into the box and shot low under Delaney. Shels defender Prendergast made a terrific block on the line but the ball only rebounded to Fernandes who slid it home.

Shelbourne were handed a lifeline in the 85th minute when Stephen Kenny handled in the box. Kilduff took it and squeezed it past Mylod. Ramblers held firm though to record a much-deserved victory.