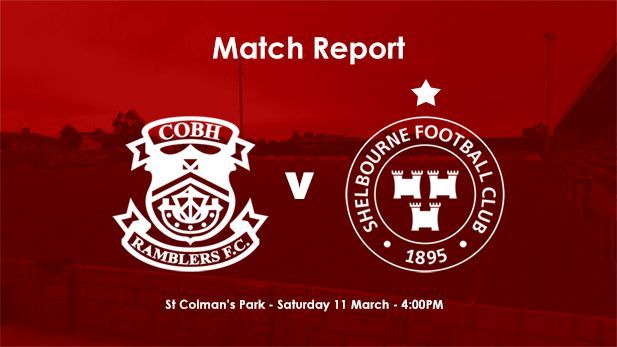 For the third week running Cobh Ramblers conceded a 90th minute goal in an entertaining 1-1 draw with Shelbourne at St. Colman’s Park.

A tense first half on a tricky pitch saw both teams struggle to create any clear cut chances. Chris McCarthy and Karl Caulfield impressed in the centre of the field with Ross Mann, returning to the line up after illness, being a constant threat down the right side. For Shelbourne, Adam Evans and Niall Lanigan were the main source of Shels good play. The best chance of the half fell to Aaron Ashe who after good build up found himself free in the box with only Paul Hunt to beat. He took a touch but put his shot wide of the left post. The second half saw both teams up the tempo and it was Ramblers who were to make the breakthrough. Good play from Shane Lowth down the left saw the ball fall to the feet of Caulfield in the box. He turned quickly and was caught by the Shel’s defender. The referee pointed to the spot and captain Chris McCarthy stood up and drilled the ball low to the keepers right. Ramblers were heading to the summit of the First Division. However, deja vu was to strike again in the dying seconds. Just like two weeks ago against Wexford, Ramblers looked comfortable in the final stages. Adam Evans received the ball on the left. He knocked the ball ahead of him and accelerated pass Lowth. Just as it looked like the ball was going out of play, Evans struck a firm cross into the box. Ramblers goalkeeper, Paul Hunt, was on the backfoot and could only flap at the ball as it flew over his head and into the far corner.

Impressive displays (and goals) on the day from Chris McCarthy (Cobh Ramblers) and Adam Evans (Shelbourne).

Report courtesy of www.sseairtricityleague.ie – with thanks