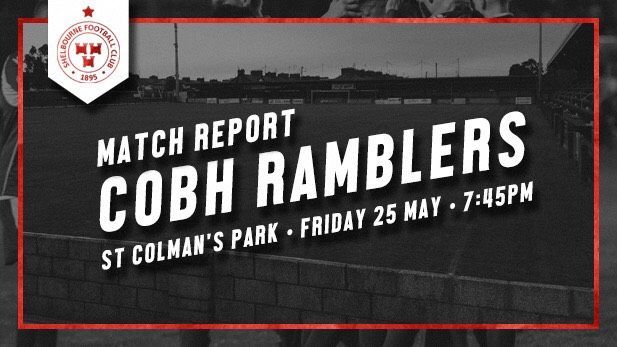 The opening half was dominated by Shelbourne with the front three of O&rsquo; Sullivan, Evans and English looking threatening from the off. The away side should have taken the lead in the 5th minute when a ball over the top caught Ramblers goalkeeper Paul Hunt in two minds as to whether he could catch the ball or not.

He opted to head clear but it fell nicely to Kavanagh who lobbed the ball towards goal but it went agonisingly over. Further chances for Hughes and English were missed before Evans spurned a tap-in at the back post in the 21st minute.

After good work by English, he fizzed a ball across the six-yard box that Evans somehow missed. The opening goal looked certain to come and it duly arrived in scrappy circumstances in the 32nd minute when English pounced on a poor header from Cobh defender O&rsquo; Sullivan to neatly stroke home pass Hunt to Shels a deserved lead.

Ramblers pressed late in the half for an equaliser but failed to muster any clear-cut chances. The second half saw Shelbourne extend their lead when a delightful ball by Kavanagh into the box could only be flicked on by McSweeney towards the back post where English was lurking.

The young attacker set himself and rifled a volley past Hunt for his second goal of the night. Moments later David O&rsquo; Sullivan had the opportunity to put the game beyond doubt but his shot was well saved at the near post by Hunt.

That miss didn&rsquo;t prove too costly however as in the 68th-minute Shels sealed the three points when Brown broke down the wing and his cross was spilled into the net by Ramblers captain Hunt.

It was a poor mistake by the Rams netminder that summed up his team’s lacklustre display throughout. For Shels, this was as dominant a display that they could have hoped for, especially away from home, and were full value for their victory.

Report with thanks to sseairtricityleague.ie