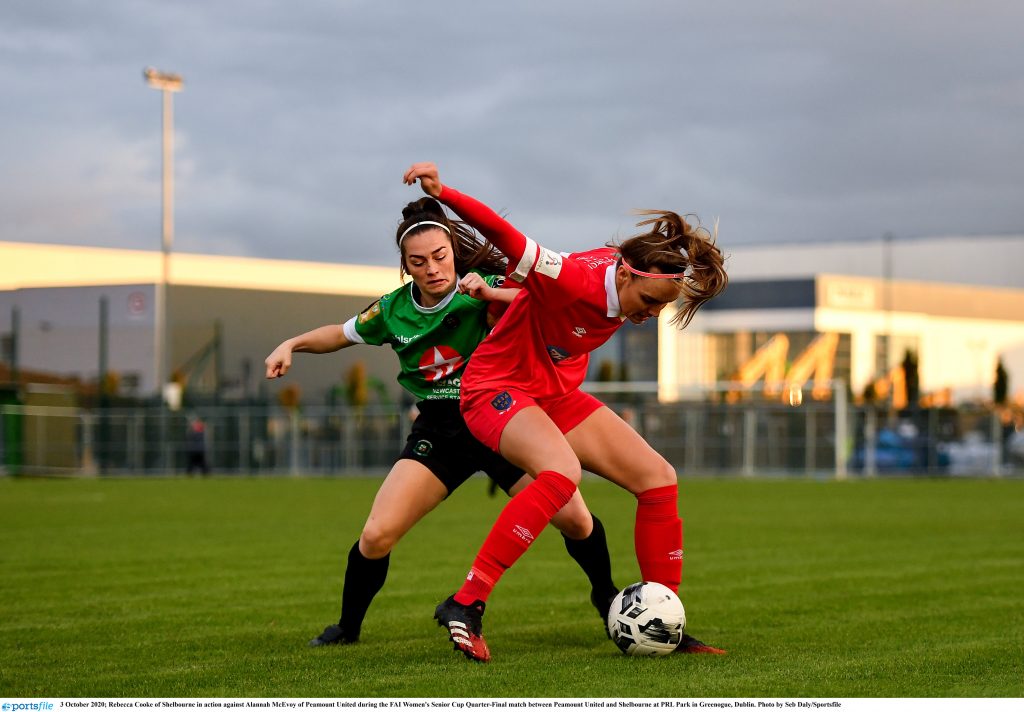 Rebecca Cooke’s wonder goal against Peamount United in the Women’s National League in October 2019, became a Twitter sensation.  The goal lit up social media and received double the votes of Oscar Brennan’s league winner in Drogheda to claim Shelbourne FC goal of the season 2019. This outstanding piece of football had another significant reward.  Fast forward two years, and Rebecca has been snapped up by Quinnipiac University in Connecticut on a sports scholarship.

Rebecca has fine football pedigree.  Her grandfather, Martin, is an esteemed coach with Belvedere FC.  Current Irish Manager Stephen Kenny and ex Internationals Stephen Kelly and Stephen Elliott were taught how to play and emerged under Martin’s tutelage. “Grandad brought me down to Belvo to train with the boys teams” Rebecca recalls.  “I loved it, played goal at first then moved outfield “.  Rebecca says her grandfather has taught her the most important lesson in football and in life, “always learn from your mistakes “. This has stood her in good stead.

After a spell with Home Farm, the Portmarnock native would sign for the inaugural Shelbourne under 17 squad. This was a tremendous source of pride to her family, especially to Martin, who is also a long-standing Shels supporter. He says “ I first started following the Reds in the 1960s, and used to bunk into Tolka Park to see the likes of Strahan, Hannigan and Barber”. The Shelbourne Women’s National League team playing in Tolka has proved a great experience for Rebecca. “With the greatest respect to the A.U.L. In Clonsaugh, nothing compares to playing in a stadium with such a rich history dating back almost a hundred years”. She believes that equality is gradually coming to the women’s game in Ireland. “A lot of the credit is due to Shelbourne Football Club, who have taken a number of steps to boost equality and parity of esteem for all of our players.”

Her club and under age international reputation, lead to Quinnipiac showing an interest in acquiring her services, and in January she made the move. It has been a resounding success. Since the season started in March Rebecca has been named the MAAC Rookie of the Year and has been featured in the New England Soccer Journal’s Best XI. She believes the “standard is really high, there are girls from the Netherlands and Spain on our team”. However she is at pains to point out that the scholarship is not all about football. There is a serious academic side. Rebecca studies Criminal Justice and her career goal is to join the FBI. Back in Dublin for a break, she will train with Noel King’s Shels team.  She is very impressed with the off the field developments at Tolka this season. “The mental health promotion and anti stigma message on the new Shelbourne team kits is important and valuable for so many young people today”.

Rebecca has not given up on a full Irish International career.