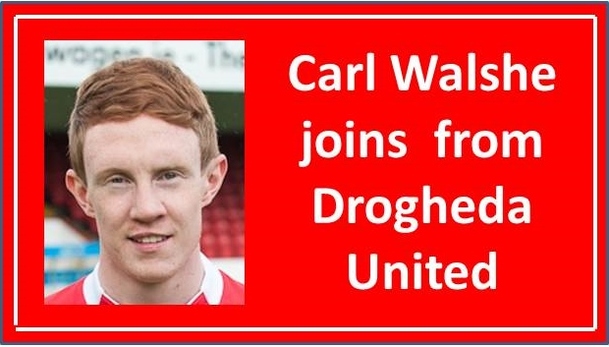 Carl, who last played with the Reds during the second half of the 2013 season, has been resigned for Shelbourne today.

Carl joined Shelbourne in July 2013, having returned to Ireland from Portsmouth, via Bognor Regis. He had signed for the Fratton Park side from home Farm in July 2009, but was released by them in July 2012 and spent a short time with Bognor Regis.

Having signed for Shels in July ’13, hemade his Shels debut away to Sligo Rovers on 27 September and made 2 league appearances, along with one in the EA Cup and one in the FAI Cup.

Shelbourne were relegated at the end of the season and a month later Carl signed for Drogheda United, then under manager Robbie Horgan. He played a big part in Drogheda United’s 2014 season, appearing in thirty-one league games, one EA Cup game and in three FAI Cup games for the club and scoring two goals, as they finished ninth in the Premier Division table.

Carl has not been involved as much this season, under Johnny McDonnell, but he has made 14 appearances in the league and one in each of the EA and Leinster Senior Cups.