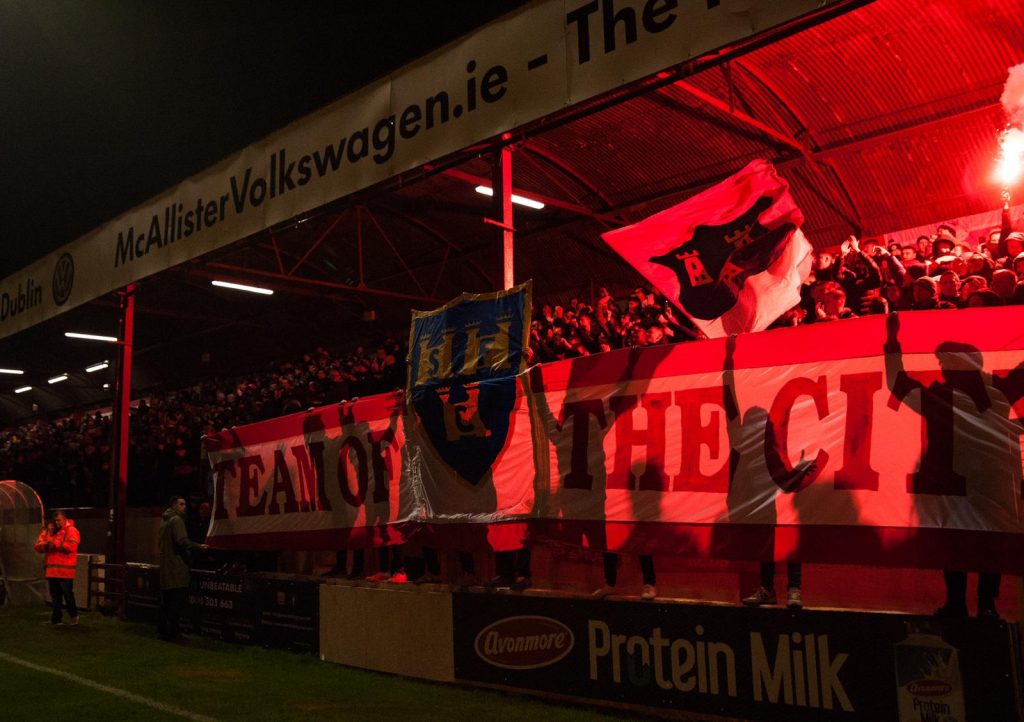 Having played underage football with Shels, secondary school teacher Brady has Red running through his veins. Despite growing up in Tipperary, Jack’s father is from Drumcondra and often brought the keeper to Tolka when they were back in Dublin. Now in his second spell with the club having re-signed in 2020 following spells with Longford Town and Limerick, the Ballina man is a fan favourite in Section E and has no problem reminding people about his ‘don’t you want me, Brady?’ chant.

The Ballyfermot man caused quite a stir when, after winning St. Pat’s Player of the Year two years in a row, he swapped Inchicore for Drumcondra and signed for the Reds. The 35-year-old is a one-time League winner, two-time FAI Cup winner and three-time League Cup winner, and broke the LOI clean sheet record with nine in a row for Sligo Rovers in 2011.

Right full JR Wilson, who grew up in Finglas and Tallaght, signed for Shels in July 2018. After an impressive start to the 2019 promotion campaign, Wilson suffered a season-ending injury in Drogheda and missed the rest of the season. He spent last season with Bray Wanderers before being re-signed by Ian Morris ahead of the 2021 season.

A versatile defender who can play at right full or centre half, 27-year-old Barker joins Shelbourne for 2021 after two seasons with Bohemians. Barker’s arrival was popular among Reds fans, as signing in working clothes on his lunch break immediately resonated with the club’s working class roots.

The left-footed centre half, who played at left full for his previous clubs, has been one of Shelbourne’s standout performers in each of his two seasons with the club. Luke is a leader in the dressing room, even though he’s only 27. His composure and organisation of the back four led the Reds to a good defensive record in 2020 despite relegation.

Another left-footed centre half, Edinburgh native Gilchrist learned his trade at St. Johnstone. He had loan spells with Elgin City and Peterhead before moving to Ireland to play for Shamrock Rovers and Derry City. Injuries restricted him to six league appearances in 2020, but he was a mainstay in the Candystripes back four in 2019.

A product of UCD’s conveyor belt of LOI talent, six-foot-three centre half Kouogun joined the Reds in February 2021 having left Harrogate Town in England’s League Two. He is the second Cameroonian to play for Shels, the other of course being Joey Ndo. Maxi also had spells with Waterford and Warrenpoint Town, but Shels fans will mostly remember his dominant performances for UCD against the Reds in Belfield in 2018.

A former Liverpool academy player, Blanchardstown man O’Hanlon joined Shels in 2019 as a midfielder but made the left back spot his own a year later, playing more minutes than any other Red in 2020. A versatile left-footed player, O’Hanlon can play at full back, centre midfield or on the left wing.

Left back O’Connor grew up in Enniscorthy, Co. Wexford, but is a product of the St. Pat’s academy. He made his LOI debut with Waterford, before moving to Cork City where he won the FAI Cup in 2016. He moved to Preston North End in the Summer of 2017, but still played a major part in City’s League and Cup double that season. O’Connor returned to Cork in 2019 and was part of their relegated team in 2020.

A fan favourite in Tolka, Ryan Brennan was one of the stars of the 2019 promotion campaign and was voted Shelbourne Player of the Year in 2020, when he was the club’s top goalscorer from midfield. A vastly experienced player, Brennan won promotion with Monaghan United in 2011 and Shels in 2019, earned an FAI Cup runners-up medal with Drogheda United in 2013 and has played in the Europa League three times.

Having grown up in Laytown, Co. Meath, Poynton joined Dundalk as a 15-year-old in 2013 and made his first team debut for the Lilywhites aged 16. Following a loan spell with Bohemians and a season with Waterford, Poynton signed for Shelbourne ahead of the 2020 season. Despite playing at right full, instead of his preferred position in midfield, the 23-year-old was a model of consistency, and also grabbed a goal against his former team in Oriel Park, before a season-ending injury at home to Sligo in October.

A 22-year-old midfielder, who joined Shels from UCD, Quinn didn’t see much playing time in the promotion season but was a regular in the starting 11 in 2020. His energy and eye for a pass from midfield garnered well-deserved praise. Quinn’s creativity will be crucial to the Reds’ promotion bid in 2021.

A 30-year-old creative midfielder who has played for both Real Madrid and Liverpool’s academies in the past. Following spells with Huesca (Spain), Ottawa Fury, Blackpool, Tranmere Rovers and Accrington Stanley, the Argentine came to Ireland in 2019 and spent two seasons with Derry City. Bruna has represented Spain (where he grew up) at Under 17 level and Argentina (where he was born) at Under 20 level.

Another Swords man, McManus returned home to sign for the Reds after leaving Preston North End in July 2020. The 19-year-old central midfielder played for St. Kevin’s Boys before going across the water.

20-year-old Farrell was brought to Tolka from Finglas United (previously WFTA) by Owen Heary in January 2018. His direct running from behind the centre forward has caused nightmares for defenders in his three seasons in Red. ‘Apro’ was a regular in the starting 11 when Shels won promotion in 2019, making 17 starts.

Ballymun native Rooney played his schoolboy football with St. Kevin’s before joining Shelbourne in 2015. He made his senior debut in 2017, and became a mainstay on the left wing in the Premier Division in 2020.

Another Shelbourne academy product, Cetiner was promoted to the first team by Ian Morris in July 2020. The 19-year-old winger will be looking to break into the starting 11 more regularly in 2021.

Dundalk native O’Connor signed for Shelbourne from Scottish Premiership side Ross County ahead of the 2021 season. The 22-year-old striker’s previous clubs include Dundalk, Bristol City, Linfield and Waterford. He played for St. Kevin’s Boys before making the step up to LOI football with Dundalk in 2015.

A former Liverpool academy player and Irish underage international, 21-year-old McAuley joins the Reds having previously played for St. Patrick’s Athletic and Bohemians in the LOI. The striker from Tallaght is one of three promising options for Ian Morris up front in 2021.

Limerick man Mahdy was the cause of much excitement when he joined Shelbourne from UCD in January 2021. The 22-year-old striker scored 16 goals in 18 games for the Students in 2020. He signed for the Reds amid offers from several Premier Division clubs.